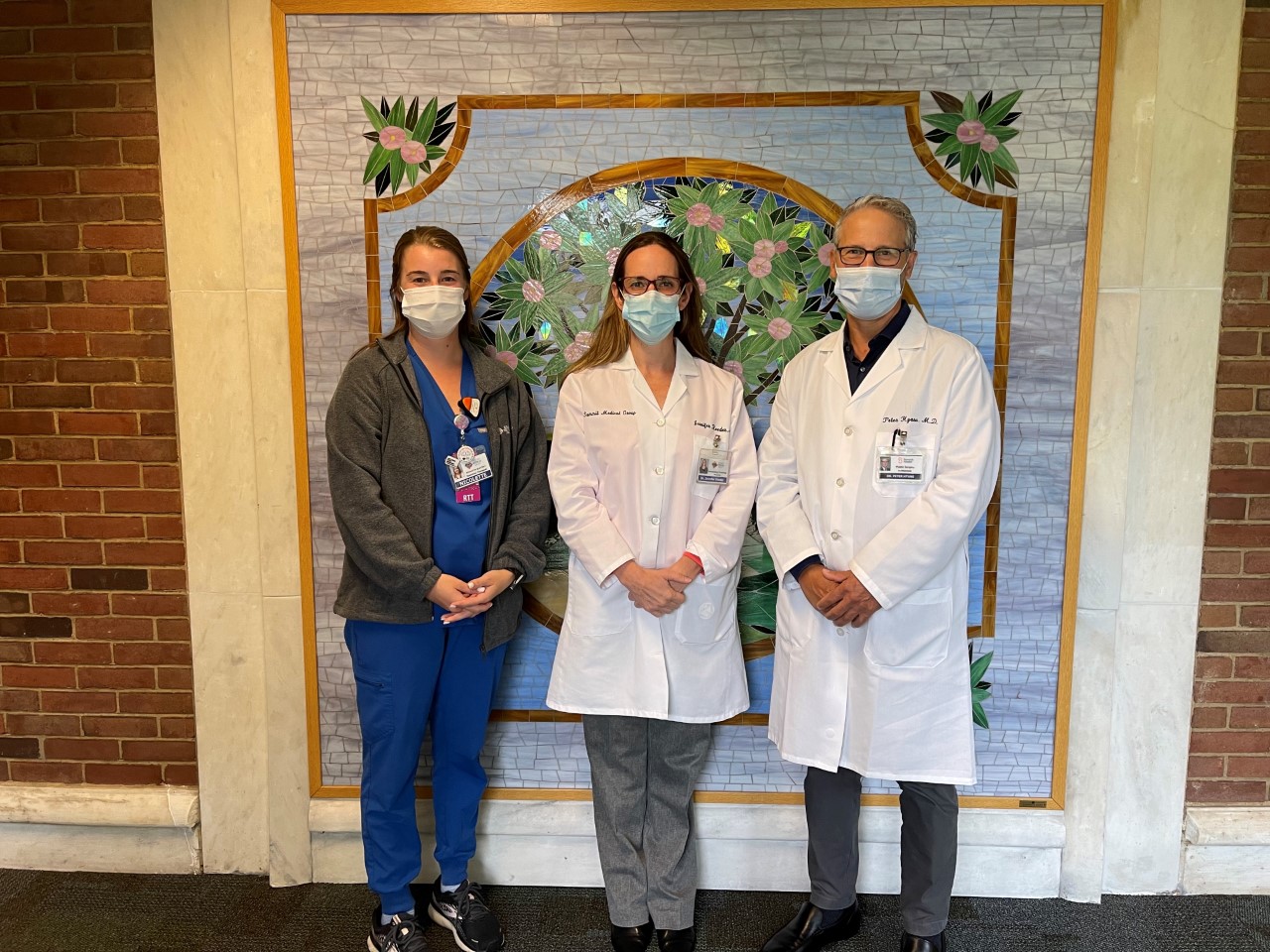 It was the little things that comforted Alex Kelly the most throughout her two-year journey with breast cancer. The team members, including Dr. Lozner (now retired) and Sophia, his certified medical assistant, who stayed late to perform her biopsy the day before Thanksgiving in 2019, as well as Dina, the ultrasound technician. Dr. Jennifer Reeder, the oncologist who answered questions from her entire family on conference calls. The letters of support from students and videos from the track team. The nail polish kit that Nikki, a radiation oncology therapist, gave her as a gift.

“It was a very sad reality,” says Ms. Kelly. “I was diagnosed at 29 years old with a disease most women do not think about until they are in their forties or fifties.”

Nearly 1 in every 8 women develops breast cancer at some point in their lives. Ms. Kelly remembers vividly the morning she became one of them. She noticed a lump in her breast while taking a shower. Over the next few weeks, it became painful to touch. Ms. Kelly reached out to her gynecologist at Summit Health using the online patient portal and had an appointment with the Breast Care Center that same afternoon. A week later, she was diagnosed with invasive breast cancer, which had affected her lymph nodes.

“I want young women to know breast cancer is something that can affect them,” she explains. “I tell everyone to get their breast exams. If you feel something unusual, do not wait — see a doctor right away.”

As her breast surgeon, Diana Addis, MD, explained to her, the road to recovery would be long, and life would not be normal for some time. Since the cancer was aggressive, treatment would include chemotherapy, surgery, radiation, and eventually breast reconstruction. Immediately, a team of doctors, which included Jennifer Reeder, MD, an oncologist at Summit Health, assembled around Ms. Kelly to develop a plan.

“I had complete trust in them. They spent a lot of time explaining the science behind all the treatment options,” Ms. Kelly recalls. “I want other patients to know what an amazing experience I had at Summit Health during the most difficult time in my life.”

The next month was a flurry of doctor visits, scans, and tests. But the physicians, technicians, and breast nurse navigator—who serves as a breast cancer coach—was there for her every step of the way. “They took the burden out of me needing to make all these phone calls and set up appointments. Instead, they said ‘show up here, at this time,’” she describes.

A diagnosis of cancer can trigger a range of emotions, including anger, sadness, denial, and grief. “At first, I had this overwhelming fear of the unknown—of not knowing how chemo would affect me or what it would be like to lose my breasts,” she says. “But then I moved into this mindset that there was no other option than to fight. I tried to think one step at a time. I would set a goal, and once I reached it, I’d aim my sights on the next stage of treatment.”

Chemotherapy was one of the hardest steps. Ms. Kelly says she felt exhausted, lost her sense of taste, and her hair began to fall out. She is grateful for the amazing infusion nurse who provided thoughtful suggestions on how to manage the effects of chemotherapy, as well as an inspirational gift on her very last day. Thankfully, the treatment was a success, and after six months she elected to have a double mastectomy.

“It is a very personal decision for every woman. Personally, I did not want anything hanging over my head,” says Ms. Kelly, who felt at ease with Peter Hyans, MD, a plastic surgeon at Summit Health. “Dr. Hyans was like an artist, and I knew when I was ready for reconstruction that I was in the best possible hands.” 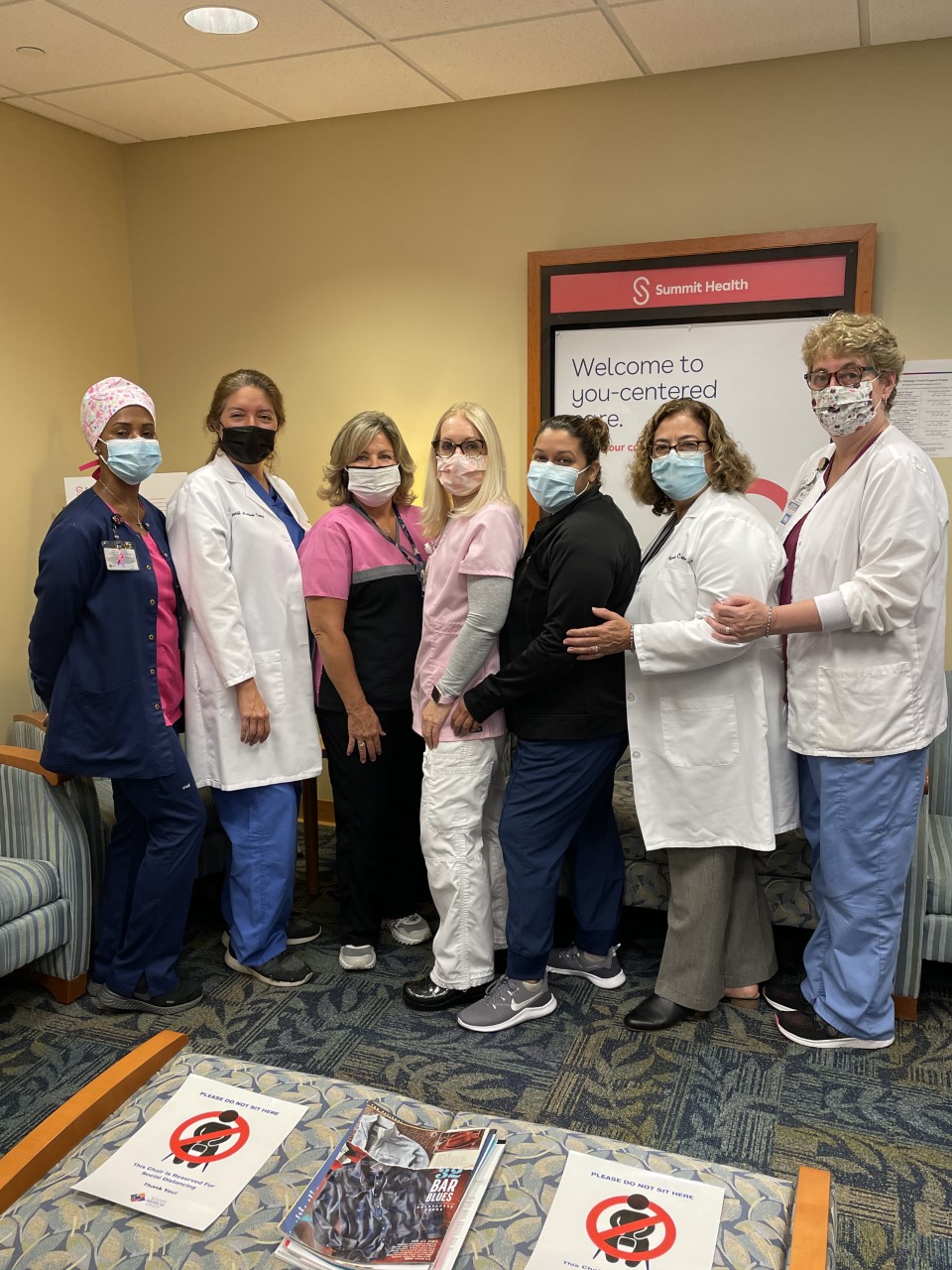 Ms. Kelly and her family also found it comforting to know the team of physicians was just around the corner. The 10-minute drive was particularly convenient during radiation when she had to be there every single day for treatment.

She drew strength from the incredible community around her. “Someone was always doing something to make my life easier,” she recalls. “I am so thankful for everyone who supported me — the doctors, nurses, nurse navigator, friends, family members, coworkers, and students, as well as my track and school communities. They really healed me inside and out.”

She completed chemotherapy around the same time that schools went into lockdown from the pandemic, and everyone felt isolated. “Being away from my students during treatment was really difficult, and then COVID came,” she said. “I had not physically seen them in a few months, so it was amazing to see how much they had all grown.”

Today, Ms. Kelly is back at school doing what she loves most. The former collegiate athlete is cycling and lifting weights again. She is also planning a wedding with her fiancé for next year.

Looking back, she feels an overwhelming sense of gratitude each day. “I try to look at what I now get to do in life rather than feeling like my day-to-day is what I have to do. My list of things I am grateful for could go on and on, and focusing on that list has really helped me.”