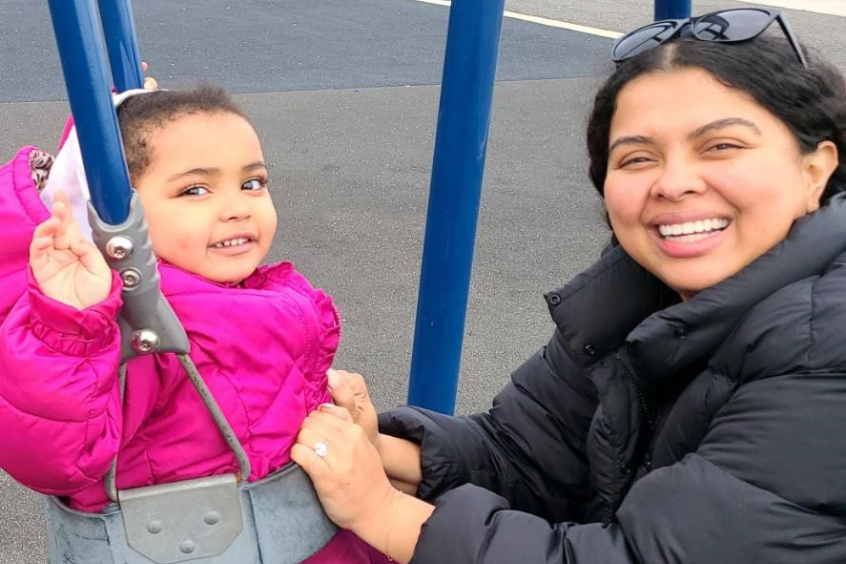 Like many patients in our area, Erica had seen on the news that cases of a rare disease called monkeypox were popping up throughout the country. Monkeypox, which is closely related to smallpox, is a virus that causes flu-like symptoms including fever, fatigue, and muscle aches, along with a telltale blistery rash. But with only a few hundred cases reported in the U.S. at the time, Erica never thought monkeypox would impact her family.

A few days after a relative came to visit, Erica found out the family member had tested positive for monkeypox. While the virus is spread primarily through skin-to-skin contact, it can also be contracted from being in close contact for an extended period of time. Erica, who has been a patient at Summit Health for several years, reached out to her primary care physician and her 3-year-old daughter’s pediatrician for advice.

“I was really worried about my daughter. She had been cuddling, getting piggyback rides, and sharing ice cream with the relative who tested positive for several days,” Erica describes. “I didn't know anything about monkeypox or how it affected young children.”

Her simple phone call on Thursday, June 16, sparked a collaborative effort between Summit Health and several government agencies to protect both mom and daughter from developing or spreading the virus. A vaccine for monkeypox existed that could help them, but it was not widely available yet. Nearly a dozen specialists teamed together with the New Jersey Department of Health (DOH), Centers for Disease Control and Prevention (CDC), and Food and Drug Administration (FDA) to transport, store, and administer the first of the double-dose monkeypox vaccination, JYNNEOS™, to both patients within 36 hours.

“Working in close concert with state and federal agencies, we are very proud that Summit Health was able to administer the first two doses of the JYNNEOS vaccine in the state of New Jersey for the prevention of monkeypox. This may also have been the first vaccine dose given in the country to a child for post-exposure prophylaxis,” says Ashish Parikh, MD, Chief Quality Officer at Summit Health.

Immunizations are generally administered weeks before an individual is exposed to a potential infection. This gives the body time to build up antibodies against the virus. JYNNEOS, which is used to vaccinate against both smallpox and monkeypox, has also been found to have a prophylactic, or protective, effect after an individual has come into contact with the virus. Since Erica and her daughter had not developed any symptoms yet, they were eligible to receive the vaccine after exposure. Adds Dr. Parikh: “It’s rare to have a vaccine that will prevent you from getting a virus in this way.”

Erica called her primary care physician just as the office was closing on Thursday afternoon. Less than 24 hours later, Summit Health received the vaccine from the state, and Erica was at the Florham Park urgent care center receiving her first dose on Friday, June 17. Since JYNNEOS is only approved for individuals 18 or older, special authorization was needed for her daughter. Through the expedient efforts of Summit pediatricians and the New Jersey Department of Health, FDA authorization was obtained the following day, and the 3-year-old had her first shot on Saturday morning in the Verona office, administered by pediatric specialist Alexa Kemeny, MD.

The challenge with administering JYNNEOS is that local physicians and pharmacies do not carry the vaccine. Instead, JYNNEOS is stored in a national stockpile in the event of an outbreak. In late June, a week and a half after Erica and her daughter received their first vaccine, the federal government announced a widespread response to the monkeypox outbreak. The national plan includes making testing more widely available, immunizing individuals at high risk of exposure, and sending 1.6 million doses of the vaccine to states in the coming months.

Summit Health physicians knew time was of the essence when Erica called. For JYNNEOS to be most effective, individuals should ideally receive the vaccine within a four-day window of exposure. The care team coordinated with the N.J. DOH and CDC to obtain and store the doses, while pediatricians worked with the FDA to obtain special approval for use of the vaccine in the young child.

“This was a multidisciplinary team effort with guidance from Daniel Hart, MD (infectious disease), Gary Mazer, MD, and Dmitry Volfson, DO, (emergency medicine), Laura Balsamini, Pharm D (pharmacy services), and Alexa Kemeny, MD, and Rizwana Khokhar, MD (pediatrics),” explains Dr. Parikh. “We are extremely grateful to everyone involved. This is the finest example of our ability to provide compassionate, connected care to our patients in their hour of need.”

JYNNEOS is a two-shot series that is administered four weeks apart, and Erica and her daughter will receive their second shot in mid-July. Storing the vaccines properly is of utmost importance. Since specialized storage units are available at the Florham Park location, the state was able to supply all four doses of the vaccine to Summit Health at once. The remaining doses were delivered frozen and secured in the freezer.

“The beauty of Summit Health is that we have a deep wealth of expertise within our multidisciplinary teams. This allows us to provide truly connected, integrated care when our patients need it the most,” says Dr. Balsamini, who, in her role as Senior Vice President of Pharmacy Services at Summit Health, specializes in medication therapy management, drug use and drug safety review, and continuing pharmacotherapy education for physicians. “We also had the benefit of having an already established and very trusting, collaborative relationship with the N.J. DOH that was solidified throughout the COVID-19 pandemic.”

Both Erica and her daughter handled the vaccine well. Neither patient has shown any signs of developing monkeypox.

“The pediatricians at Summit Health were incredible,” Erica says. “I know they took time away from their regular schedule to get this vaccine for my daughter. I couldn’t believe how fast they worked and that we were both able to be vaccinated so quickly. I am so impressed and appreciative.”

What You Need to Know: Monkeypox

Monkeypox is an infectious disease that is usually found in remote areas of Africa. The virus was first discovered in monkeys and later transmitted to humans. Since the beginning of 2022, cases have been appearing throughout the country. While most of the initial infections were linked to either international travel or imported animals that carried that virus, person-to-person spread in the U.S. continues to rise. The last outbreak of monkeypox in the U.S. was in 2003. For the latest information on monkeypox, including the number of cases, visit the CDC’s website.

“Past outbreaks in Africa have caused fatalities, but this variant is much milder,” explains Dr. Parikh. “Most people who are getting monkeypox are not becoming terribly ill or dying from the disease.”

The symptoms of monkeypox are similar to smallpox and commonly include fever, headache, muscle aches, and fatigue. Most individuals who are infected also develop a rash, which looks like pimples or blisters, and appears on the face, hands, feet, chest, or genitals. Monkeypox is generally mild, and most patients recover in a few weeks. Antivirals and other treatments are available.

“The general risk to the population is still low enough that you do not necessarily need to change your behavior,” says Dr. Parikh. “So far, the disease has been spreading primarily among men who have sex with men.”

Individuals who have symptoms suspicious for monkeypox should call their doctor before they come in for an appointment. They may advise a virtual visit or a specific location that has isolation rooms to protect other patients. Anyone who suspects they have been exposed to monkeypox should contact their primary care physician or pediatrician.

Please remember: Summit Health does not carry the monkeypox vaccine. Only the state DOH can distribute the vaccine to providers after determination of eligibility and review of the clinical findings. JYNNEOS is not available to the general public for prevention in people without symptoms.

Should You Feed a Cold and Starve a Fever?