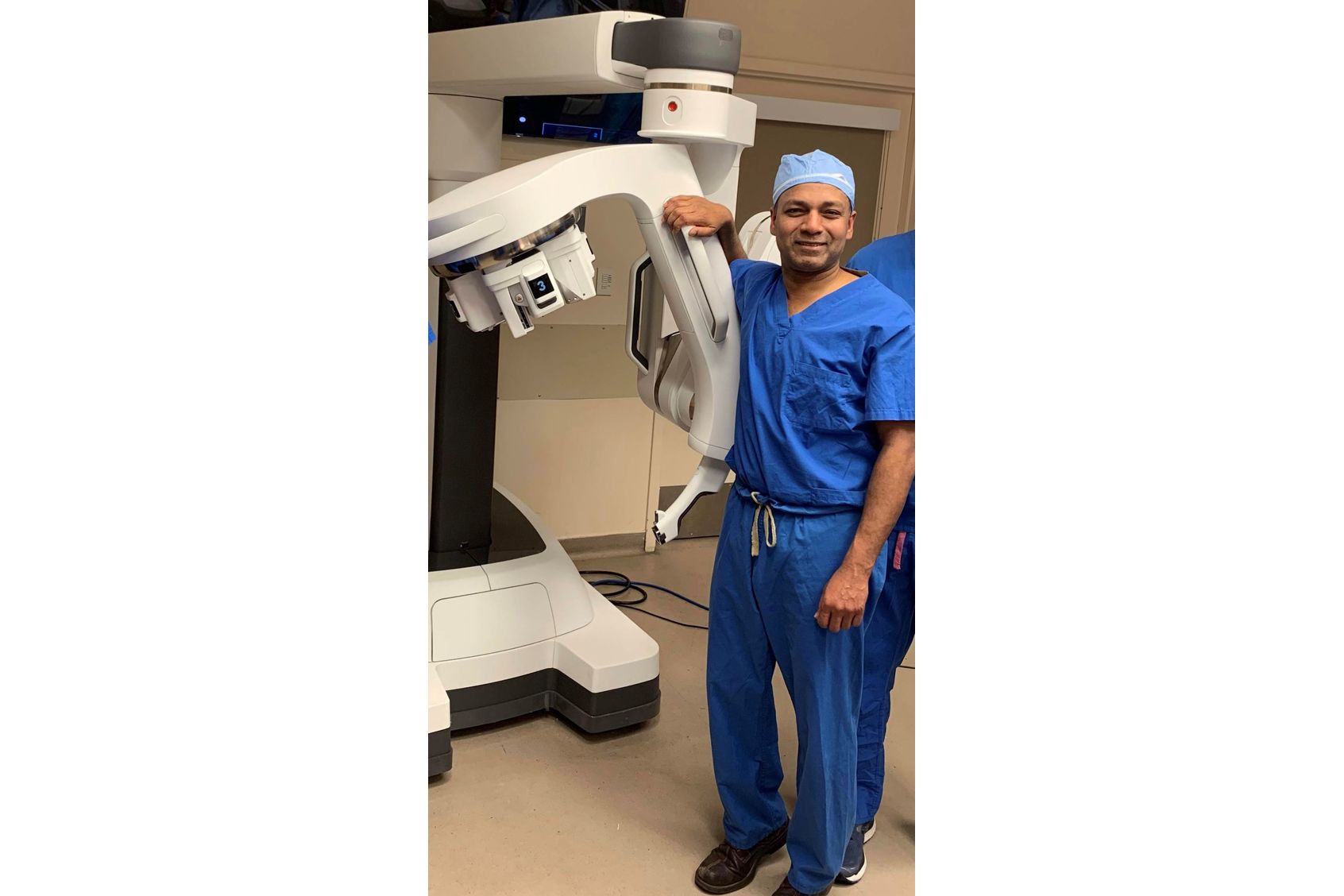 When Peter Colro was diagnosed with kidney cancer, he was understandably concerned about the future. But as soon as he met Mutahar Ahmed, MD — a physician at New Jersey Urology (NJU) who specializes in robotic surgery — Peter felt at ease.

“My head was spinning when I first heard the news,” he describes. The 56-year-old who works as an operational engineer never had any symptoms. Peter’s physician noticed he had a tumor in each kidney during a routine CT scan for another condition. He had an appointment with Dr. Ahmed just one week later.

Peter needed surgery right away. “Dr. Ahmed told me he had performed this procedure thousands of times. He had a tremendous amount of confidence, and that helped reassure me that I was going to be fine,” explains Peter. “I went into both surgeries thinking I was coming out with two functioning kidneys.”

And that is exactly what happened. After two separate minimally invasive robotic surgeries — one involving each kidney — the tumors were removed, and both organs were working normally. The goal of robotic surgery is to create as little damage as possible by using smaller incisions or a more direct route to access the organs and tissues. Remarkably, as a result, patients like Peter require very little recovery time.

The field of robotic surgery is advancing rapidly. Peter’s surgeries, which were performed only 4 months apart, used different technologies. In September 2021, Dr. Ahmed relied on a “multiport” robotic technique that created five tiny, 1- to 2-centimeter incisions to remove a large tumor from the left kidney. Then in January 2022, he used a new “single port” robotic technique that made one small, 2- to 3-centimeter incision which could directly access the right kidney.

“There have been various forms of single-incision surgery throughout the years; however, single port is the first true robotic platform that incorporates all these multiple incisions into one,” explains Dr. Ahmed, who operates at Hackensack University Medical Center. “Using this approach was important because we are able to remove the tumor while preserving full function of the kidney.”

Studies have found numerous advantages to the single port robotic technique. Dr. Ahmed has published several papers showing that patients who have single port surgery experienced less pain and shorter recovery times when compared with other types of surgery. Many individuals were even able to go home the same day as their surgery. By avoiding a large abdominal incision that requires moving other organs to reach the kidneys also reduced the risk of complications, such as hernia.

Peter's experience supported these findings. “My recovery time was quicker with the second surgery, having only one small incision. I also did not need a port or a drain,” he says. “My surgery was the first one that day, and by dinnertime they told me I could be discharged. I was back at work in a few weeks.”

Dr. Ahmed is one of only a few practitioners in New Jersey who specialize in single port surgery. His practice at NJU has one of the highest surgical volumes in the state. Last year, Dr. Ahmed used the single port robotic technique in more than half of the 400 surgeries he performed. In early 2022, Summit Health announced a new partnership with both NJU and Westmed Medical Group (N.Y.) to expand the urologic service line and complement cancer services.

“Single port has allowed me to perform surgery in a way I never thought possible before,” explains Dr. Ahmed. “Imagine getting on a train and having to travel past compartment A to get to your seat in compartment B. With a standard robot you must go through the abdominal cavity to get to the extraperitoneal space where the kidney is located. But with this new technology I can access the body in a more direct way and do the same surgery in a small, focused space.”

Morgan Haley, 47, also had his prostate removed by Dr. Ahmed with single port robotic surgery. “The procedure was easy, and I basically felt like myself after a week. The pain never rose to the level of needing much more than Tylenol,” he describes. “My father had the same surgery 20 years ago, and it was far more invasive. I was thankful these robotic options were available.”

The da Vinci SP® single port robotic surgery system came out in 2018, but many surgeons were wary to transition and learn a new method. Dr. Ahmed began training on the device right away and using it in patients a year later.

Dr. Ahmed says this model is just the beginning. “We have already started giving the company feedback to make single port technology even better and are teaching the technique to residents and fellows. I look forward to continuing to see what a difference this advancement makes for our patients,” he adds.

Today, Peter’s kidneys are functioning normally, and he has not experienced any negative side effects from the surgery. “I am really pleased with the results,” he says. “I would advise other patients to find a doctor who is in touch with the latest technology. Hearing how excited Dr. Ahmed was about this new robotic surgery brought me every confidence it was the right path for me.”