Sleep apnea is a serious and sometimes life-threatening condition in which breathing is interrupted during sleep. Although it often affects overweight men, sleep apnea can occur in women, men who are not overweight, and children. 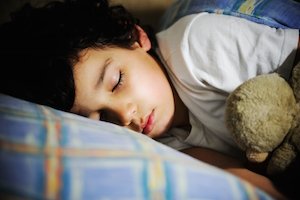 Like adults, children who have sleep apnea can stop breathing for a minute or more as often as a 50 times a night. When breathing stops, oxygen levels in the blood fall. For this reason, children with sleep apnea are at risk for headaches, poor daytime functioning, high blood pressure (hypertension), irreversible neurologic problems, learning disabilities, hyperactivity, and aggressive behavior. For these reasons, it is important to see a doctor if your child snores or has sleep apnea symptoms.

The American Academy of Pediatrics recommends a sleep study (polysomnogram) for every child who snores.

Symptoms of Sleep Apnea in Children Include:

Evaluating Sleep Apnea in your Child

In some cases, children with sleep apnea symptoms have a noninvasive sleep study to monitor and evaluate sleep patterns. Sleep studies allow experts to examine physiologic patterns during sleep to determine how best to treat and manage sleep apnea.

The good news is that sleep apnea can be effectively treated!

Treating Sleep Apnea in a Child

Depending on your child’s age as well as causes for his or her sleep apnea, treatment can include: