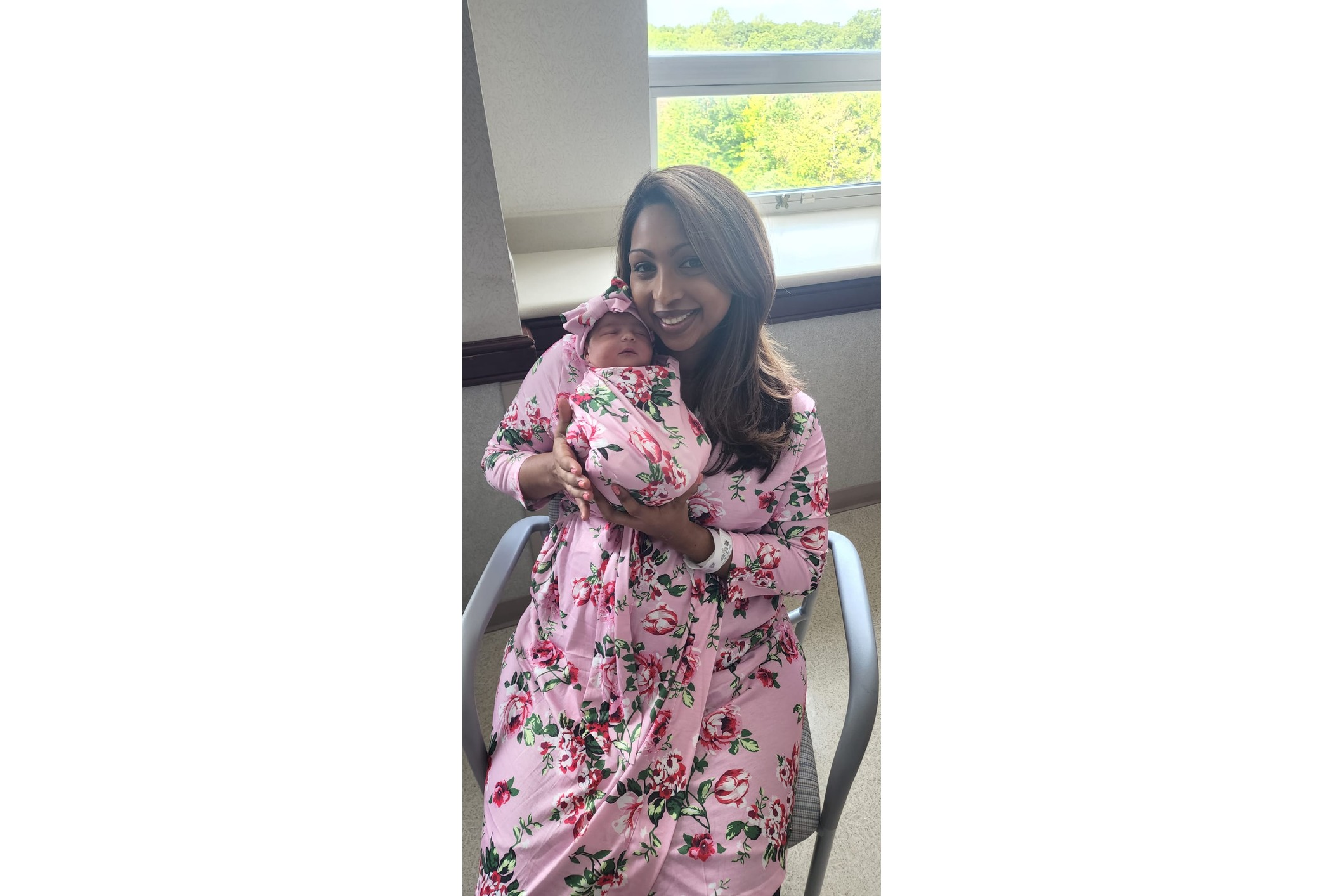 Leading up to the visit, Anu had been experiencing very mild contractions for about two days. So she decided to come in a bit early for a scheduled prenatal appointment.  Shortly before 11am, while Anu was waiting in the room for the doctor, the contractions started to progress. It was not long into the exam that the baby decided it was time to make its debut. 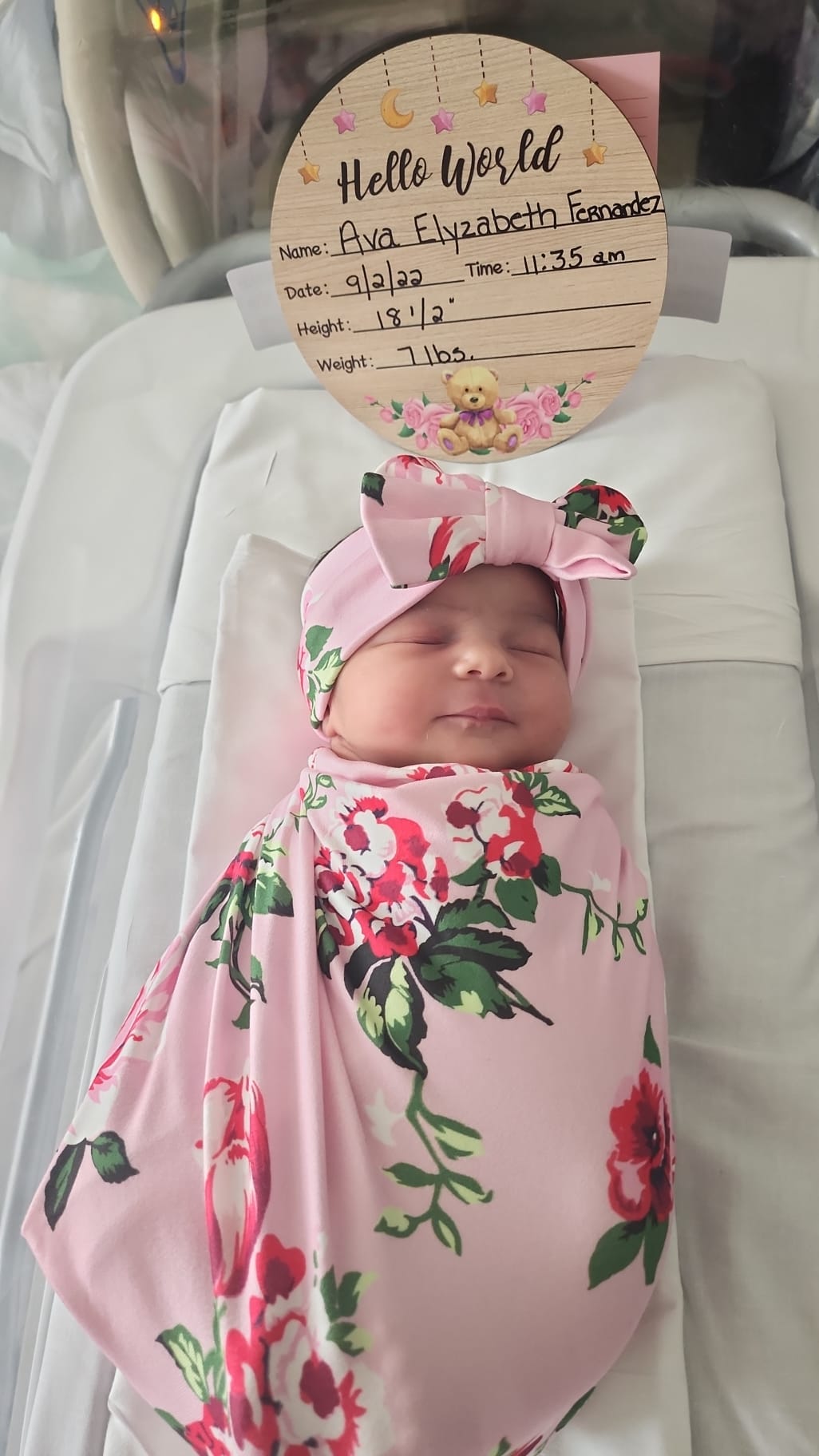 Based on Anu’s experience with baby number one, she never thought the second bundle of joy would come so quickly. But the brave mother says she would not change anything about how their baby girl — who they named Ava — came into the world.

“I’ll never forget that moment when Dr. Hayes checked me and said ‘this baby is coming now, and you are going to have it here.’ I thought, ‘how am I possibly going to deliver this baby on the same exam table where I have my yearly checkup?’” she recalls. “But, we did it! There were so many people around coming in and out to help. Dr. Hayes told me to look at her and focus. It all happened so fast.”

“Mama has been a long-time patient of mine,” explains Dr. Hayes. “She is a calm, cool, and compliant patient who doesn't complain about anything. So when I saw the discomfort in her eyes from the contraction pain I knew baby was coming, I told her to focus on me and listen as I guided her... and she did the most beautiful, spectacular job a mom can do!

Fortunately, Dad was only fifteen minutes away. He made it just in time to witness the birth of his daughter and cut the cord. Mother and baby were then transported to the hospital by ambulance. Drs. Hayes and Nikole Bobadilla, MD, FACOG, went to visit them later that day and happily reported back to the office staff that both patients were doing well.

“If it wasn’t for the amazing Dr. Hayes, the nurses, and all of the staff who were involved in my care, none of this would have happened,” says Anu. “I know everyone is calling me a hero or superstar, but I am truly blessed to have such amazing doctors and nurses — hence why I have been a patient at Summit Health for so long. Thank you again for everything. This will be a story to tell forever.”

The in-office delivery was a true team effort. Some 23 staff members, physicians, and providers worked together to successfully welcome this new life into the world. Office supervisor Joanne Amaral called 9-1-1 and delegated staff to other assignments as necessary. The patient service representatives calmly guided Emergency Medical Services to the office. Medical assistants and nurses helped with birthing needs while maintaining office flow and appointments as if it were a typical day. At the same time, the other providers made sure the rest of the patients were promptly attended to.

“It is always an honor delivering a baby and being a part of a parents most special day, but it was beyond special doing it with someone who I know so well, under such unusual circumstances and with a team that I work with on a daily basis. The staff was truly amazing, and I couldn't have done it without all of their help!” says Dr. Hayes. “This was a first in my career and a memory I will never forget. Seeing dad’s tears and happiness as he held his baby girl and rubbed Anu's head was so amazing. I am honored.”

As the mother and daughter were wheeled out on the stretcher to the elevator, the entire office gave them a standing ovation. But Anu says the staff are the ones who should receive the applause.

“I wish I could give some kind of award to every single person that helped me that day,” says Anu. “They took such good care of me. They were my cheerleaders and made me believe I could do this.”

Mother and baby are in perfect health. Proud father and big brother are in love with the new addition to their family. Someday they will tell Ava the story of how she was born. And remind her that even when things don’t go as planned, anything is possible if surrounded by the right people.

Uterine Fibroids: What Every Woman Needs to Know